Mrs. Ndoye has been practicing her art for many years. Her fascination with painting began when she was a child and up until recently she worked primarily in water colors and oils.

Mrs. Ndoye spent her college years majoring in art at Douglass College, Rutgers University in New Jersey and graduate school at the University of California at Berkeley. While at Berkeley, she earned her Masters of Art and also her teaching credential.

Following her education, she traveled to Australia. While in Australia she worked and lived with Aboriginal people. During her teaching in the Northern Territory of Australia, she was drawn to the arts of the tribal people of the top end of Australia. She attempted to combine her aesthetic with the colors and symbolism of the Aborigines.

After seven years, Mrs. Ndoye returned to the U.S.A. and became involved with images of the sea. Her paintings from this series then evolved into a study of women in mythology and now in her later years the crone in mythology. These paintings also included visual aspects of her dreams and events from her past. Some evoked nostalgia for items from her childhood, including pieces of fabric and dolls that she has saved.

Most recently, this work has moved her to create fabric art – primarily a series of dolls.

Through her dolls she is once again visiting her love of tribal art and the world of mythology. These fabric sculptures are reminiscent of the Venus of Willendorf, and African, and Latino style dolls.

In a sense she is trying to create a world inhabited by dolls that can bridge time and culture. She uses fabrics that she has collected over the years from various parts of the world and also recyclable materials. The meshing of found, modern materials with fabric from other cultures gives the impression that the dolls could be artifacts from any number of civilizations.

In fact, Mrs. Ndoye’s latest project is to make a dolls’ world. Inhabited by her creatures, it is a world where texture and fiber are highly valued. Sewing and weaving are skills much admired and threads are the new gold. She invites you into this new found world to enjoy and have fun touching and looking. 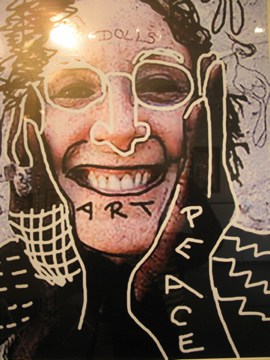